The Power Tower is an area located on Donar Island. The first titan, Voltgar, can be found at the top of the tower which was built to gather electricity from the titan to power all of Velua. The tower is a multi-floored area with numerous trainers and challenging puzzles. These puzzles include operating switches to open and close doors, riding conveyor belts, and solving a color-based code.

Power Tower has 7 floors in total all are reached by the elevators on each floor. 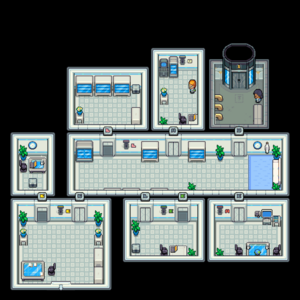 The first floor has a simple puzzle involving the use of letter correlated switches to open and close doors to gain access to the elevator room. 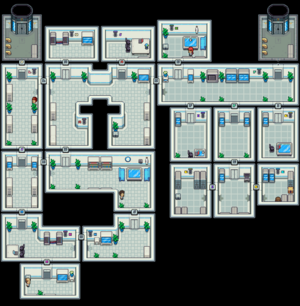 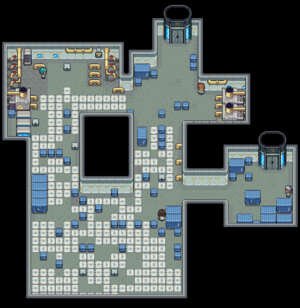 The third floor introduces conveyor belts, the player must find the right ones to take to reach the elevator. 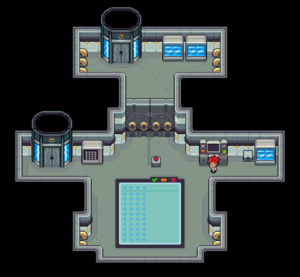 The fourth floor involves a color-based code created by Mr. Mind which the player must solve before proceeding. Players may return to solve the puzzle again even after completing it. 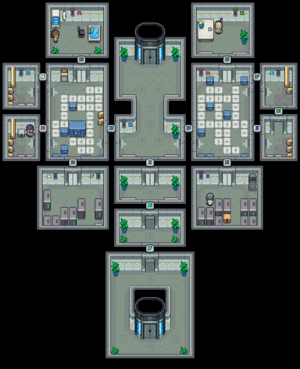 The fifth and final puzzle-based floor of the Power Tower. This floor incorporates both switches and conveyor belts. 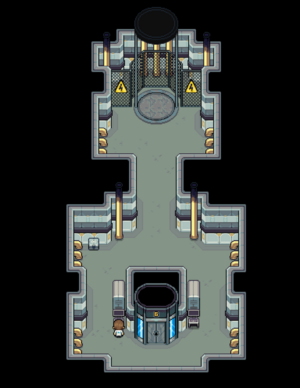 The sixth floor of Power Tower where a checkpoint is received. 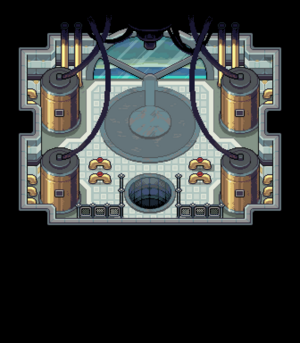 The final floor of Power Tower where Voltgar can be challenged.

This theme plays when the player inside Power Tower. (For Mobile Users, click here)

Below are tables of the required switch states for each step of the solution for their respective floors. A switch is considered to be OFF in its initial state and ON if the lever has been pulled down. Table cells with "ON" or "OFF" denote the switch be flipped to that state in that step. Cells with "o" indicate the switch must be in the ON state before flipping any other switches. Cells with "/" demand the switch be in the OFF state before flipping other switches.

The solution to the first half takes place on the east side only. The side is sectioned off by a singular door tied to the E switch, after the E door is open the states of these switches will not effect the solution on the west side.

The west side beyond the E door. Switches on the east side have no effect on the solution in this area.

Refer to following map for the most efficient path: 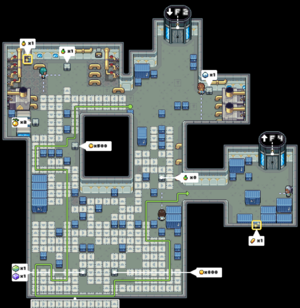 For Mr. Mind's puzzle, the player is forced to take a random guess on their first attempt then proceed to correct each guess through trial and error. This puzzle can be cheesed by saving after Mr. Mind generates the code, allowing the player to load their save to make as many attempts without having to trigger the twists.

An efficient method used by speedrunners to crack the code starts off with inputting only one fuse and swapping until its registered as a ✔ before moving onto guessing the next fuse. If a ↔ appears instead, swap the current fuse and add another fuse in its spot and continue moving and swapping the fuses until all are correct.

Retrieved from "https://coromon.wiki.gg/wiki/Power_Tower?oldid=13180"
Category:
Cookies help us deliver our services. By using our services, you agree to our use of cookies.